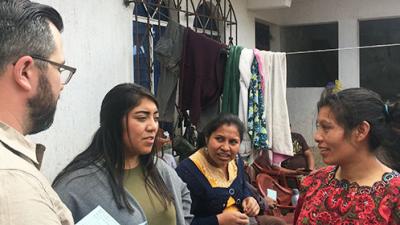 Johnson & Johnson has spotlighted the award-winning Rutgers University–Camden Spanish for Health Professions Certificate Program as an innovative, cross-disciplinary effort to tackle health disparities in minority populations in its November 21 edition of Notes On Nursing. Currently offered as an internal certificate, the program aims to educate students entering the healthcare field on how to best serve members of the population who may have trouble communicating in English.

“We need to educate nurses and other health providers across sectors to better communicate in the languages of those we serve. This needs to be broadened and become a standard of practice,” says Nancy Pontes, an assistant professor at the School of Nursing–Camden who serves as a co-leader of the multidisciplinary program. Pontes notes that improving the Spanish language skills of students and future health care providers is “perfect for Camden,” where about 40 percent of the city’s residents speak Spanish, according to U.S. Census data.

In fall of 2019, the Rutgers School of Nursing–Camden is moving forward to expand the program by offering continuing education (CE) credits for practicing nurses. As part of the curriculum, program co-directors will develop month-long online modules about Medical Spanish on difference topics in nursing that will run from September 2019 until June 2020.

This new model for educating nurses and other healthcare providers was was developed with the support of a $600,000 grant from the U.S. Department of Education’s International and Foreign Language Education office to Rutgers University–Camden. The grant unites a diverse array of Rutgers–Camden campus programs, including the School of Nursing, the Department of World Languages and Cultures’ Spanish program, the Community Leadership Center, and the Learning Abroad program. Atlantic Cape Community College is part of this coalition, which launched in 2016 and incorporates Learning Abroad programs in such nations as Bolivia, Cuba, and Guatemala. The certificate program was recently recognized with the 2018 American Association of Colleges of Nursing (AACN) Innovations in Professional Nursing Education Award.