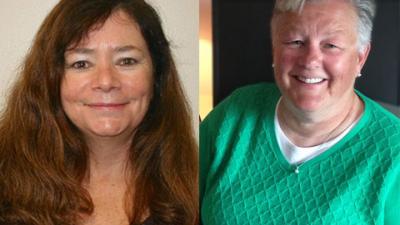 Rutgers School of Nursing–Camden faculty members Katherine Prihoda and Kathleen Jackson, both assistant professors in the school, and Project H.O.P.E., the school’s new faculty-practice partner, have been named 2017 recipients of the Chancellor’s Awards for Civic Engagement. Every day, Rutgers University–Camden students, faculty, staff, alumni, and community partners work to advance well-being for the people of southern New Jersey and the region. The Chancellor’s Awards for Civic Engagement, given annually across five categories, honor those who have achieved special distinction in this area.

The Academic Civic Engagement award recognizes Professor Prihoda’s dedicated efforts to immerse nursing students in the community through engaged civic learning with a special focus on at-risk, pre-school populations. Prihoda and her students deliver health outreach and education through partnerships with Head Start programs led by the Roman Catholic Diocese of Trenton, N.J. and the Center for Family Services, which provides Head Start in the city of Camden and across Camden County, N.J.

The Spirit of Civic Engagement Award is a tribute to Professor Jackson’s storied history of working with social enterprises to promote healthier lifestyles for the people of Camden. In 2015, Jackson began a partnership with Farmers Against Hunger to make fresh produce more accessible and affordable across low-income areas in the City of Camden, considered one of the nation’s worst food deserts. Currently, she is collaborating with Project H.O.P.E. at its Cathedral Kitchen satellite in Camden on a faculty-practice partnership that will expand the school's public health curriculum and allow students to gain experience with providing primary care in a non-traditional setting.

Project H.O.P.E., recipient of the Community Partner Award for Civic Engagement, has assisted more than 11,000 homeless persons in their journey to permanent housing and self-sufficiency for over a dozen years. It is unique in that it is the only provider of medical services specifically for the homeless in Camden County and one of five Federally Qualified Health Center (FQHC) homeless projects in the state.

The entire school looks forward to celebrating our ‘Kathies’ and Project H.O.P.E. at the awards ceremony on April 27!