Graduating Student-Athlete a Leader On and Off the Field 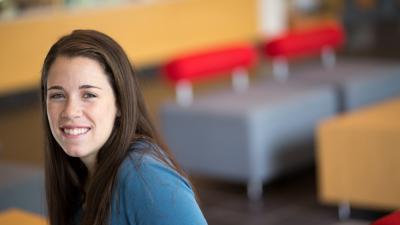 “My teammates and I were able to use sports as a platform for positive change,” says Aubrey Andrews, a Rutgers School of Nursing—Camden senior who graduates on May 18 with a bachelor of science in nursing degree. Andrews –inspired by the actions of the U.S. Women's National Soccer Team– spoke out on “#EqualPayDay” last April in support of a bill demanding equality of women in the workplace.

For student-athletes like Andrews, sports are much more than a game. Rather, they are physical and mental quests that can help make you “a better person and can be a launching pad to make a difference,” she explains.

Over the course of her career, Andrews learned to appreciate the science of maintaining proper health in order to perform at peak performance and maximize one’s athletic potential. On the flipside, however, she was also often reminded of the importance of proper medical care as she dealt with her fair share of injuries. Most recently, she suffered a serious injury playing indoor, coed soccer, breaking several bones in her ankle, dislocating it, and tearing virtually all the ligaments around the joint.

It was trying times like these that inspired Andrews to be in the position to help others and pursue a career in nursing.

For as long as she can remember, she recalls, sports have always been an integral part of her life. But rather than hinder her studies, she says, participating in athletics has taught her the structure and discipline needed to succeed at anything she put her mind to.