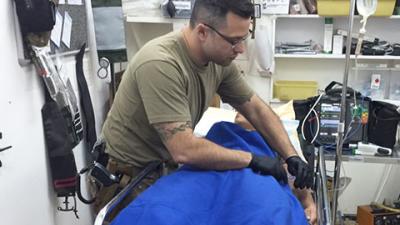 The Rutgers School of Nursing—Camden was acknowledged for its support of military employees by the New Jersey Committee of the Employer Support of the Guard and Reserve (ESGR) at its recent annual awards ceremony in Hamilton, N.J.  The ESGR is a Department of Defense program that seeks to foster a culture in which all employers value the military service of employee members of the National Guard and Reserve in the United States. The School of Nursing—Camden, which received a certificate of recognition as an employer that supports veterans, was nominated for the honor by Kevin R. Emmons, a U.S. Army Reserve captain and a clinical assistant professor with the school.

“I truly feel like no matter where you are as a nurse, you can always connect with each other. It is a universal experience. I look forward to getting back into my Rutgers routine and being able to take what I have learned and implementing it into clinical practice and teaching,” states Emmons, a wound care expert and the 2014 recipient of the school’s Outstanding Nurse Educator Award.

A resident of Medford, Emmons is reintegrating into civilian life after a nine-month tour of duty in Kuwait and Iraq that began in July 2016. He deployed with the Army Reserve’s 456th Area Support Medical Company, serving as the unit's lead nurse where he functioned as the Officer in Charge of a Role 1 Medical Treatment Facility in Iraq and as an Advance Practice Nurse delivering treatment that ranged from primary to trauma care. Consistent with his exemplary work and scholarship at Rutgers University—Camden, Emmons provided valuable training to American and coalition forces.

The certificate of recognition reaffirms Rutgers–Camden’s commitment to provide a supportive environment for veteran employees and students. Last year, the campus was the first higher education institution in the state of New Jersey named a Purple Heart University by the Military Order of the Purple Heart. Rutgers–Camden, which has also been recognized as a Military Friendly School by Victory Media, publisher of G.I. Jobs magazine, for the past six years, has taken several successful measures to help student veterans make a smooth transition from the military to academic life.

“At Rutgers–Camden, there is this strong network of support so that veterans don’t feel alone or like an outsider. In fact, they become part of an organization that is bigger than themselves,” says Elizabeth Scannell-Desch, associate dean of baccalaureate programs at the School of Nursing–Camden and a 25-year veteran of the U.S. Air Force.

The ESGR awards – many of which are progressive in nature, with each building upon the previous – reflect efforts made by employers to accommodate veteran employees through measures including flexible schedules, time off prior to and after deployment, caring for families, and granting leaves of absence if needed.

Last year, ESGR awarded Vets4Warriors — a peer support program for service members, veterans and their families operated by Rutgers University Behavioral Health Care in Piscataway, N.J. — a certificate of recognition. At this year’s ceremony, Vets4Warriors received the distinguished Pro Patria Award, the highest recognition given by the U.S. government to an employer who demonstrates exceptional support for employees who participate in the National Guard and Reserve.