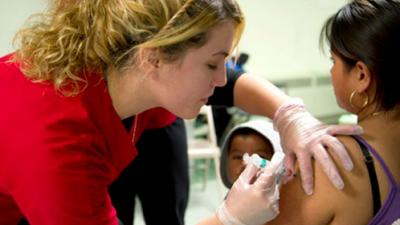 A new model for educating nurses developed by the Rutgers School of Nursing–Camden has received a 2018 American Association of Colleges of Nursing (AACN) Innovations in Professional Nursing Education Award.

The certificate in Spanish for the health professions program at the Rutgers–Camden nursing school, which seeks to promote health equity for underserved Latino and immigrant populations by strengthening Spanish language skills among future health care professionals, earned the award, which recognizes the outstanding work of AACN member schools to re-envision traditional models for nursing education and lead programmatic change.

“Health professionals must be able to serve diverse communities, which is why Rutgers–Camden created this innovative program,” says Donna Nickitas, dean of the Rutgers School of Nursing–Camden. “We are gratified that the AACN has recognized this exemplary program and its potential to elevate the health of all of our communities.”

The program was developed with the support of a $600,000 grant from the U.S. Department of Education’s International and Foreign Language Education office to Rutgers University–Camden. The grant unites a diverse array of Rutgers–Camden campus programs, including the School of Nursing, the Department of World Languages and Cultures’ Spanish program, the Community Leadership Center, and the Learning Abroad program. Atlantic Cape Community College is part of this interdisciplinary coalition, which launched in 2016 and incorporates Learning Abroad programs in such nations as Bolivia, Cuba, and Guatemala.

Read the full story via NewsNow »